The great master Gyalwa Longchen Rabjampa (ཀློང་ཆེན་རབ་འབྱམས་པ་དྲི་མེད་འོད་ཟེར།1308-1363) was one of the foremost saints of Tibet who has set his gracious feet in Bhutan and left an awe-inspiring legacy for Bhutan and its future. Born as a child prodigy of Tibet, he committed the entire Kanjur and Tenjur to his memory. The Buddha of his time, Rigdzin Kumaradza trained him until he became enlightened. He spent most of his time at Gangri Thodkar peak, Southern Lhasa, and produced magnum opuses of over thirty volumes. For a detailed English-language biography of his life, see here.

All his compositions feature amazing qualities and uniqueness of a visionary and a fully enlightened being. While he dictated, the Dharma protector Rahula scripted his teachings, Ekajati procured papers, and Damchen Dorje Legpa supplied ink. They also vowed to guard every word and line of his literary works, facilitate practitioners and students of his teachings until becoming completely awakened.

Longchenpa is the direct incarnation of Lhacham Pemasel, the daughter of King Trisong Deutsen and Queen Droza Jangchub and direct student of Guru Rinpoche. She died at the age of eight, but Guru Rinpoche drew a red Nri letter on her heart, summoned her consciousness, and restored her to life. There and then, Guru Rinpoche gave her complete transmission of the Nyingtik teachings. She passed away soon.

Centuries later, Princess Pema Sal’s incarnation, the omniscient Longchen Rabjampa was born to the master Tensung, an adept at both philosophy and the practice of mantra. It is said that at the age five Longchenpa could read and write without much effort, and by age seven his father began instructing him in Nyingma mantras. Later, he developed a very special feeling and connection for Bhutan. Of the eight “Lings,” when he was particularly residing at Tharpaling, he expressed time and again his love and care for Bhutan and aspirations to guide the nation until the end of time through his reincarnations.

Studies in Tibet with great masters

Later, Longchenpa also studied extensively with the Third Karmapa, Rangjung Dorje, Sakya Lama Dampa Sonam Gyaltshen and so on.  At the age of nineteen, Longchenpa entered the famous monastic college Sangphu Neutok, where he acquired great scholarly wisdom and later he became the Lord Abbot of Samye monastery. He mastered so many teachings, in fact, that he became known as Samye Lungmangpa, the One of Samye with Many Transmissions.

Longchenpa’s influence upon the Nyingma lineage is unparalleled. He united and compiled teachings concerning the two main Dzogchen Heart Essence lineages in a work entitled Four Volumes of the Heart Essence, adding three commentaries of his own to the teaching of Guru Rinpoche and Pundit Vimalamitra. For more on the contents of his works, see here.

Travel and stay in Bhutan

As foretold by Khandro Dorje Phagmo, Longchenpa traveled to Bhutan at the age of 42. During his decade long sojourn in Bhutan, he continued his writings and established eight spiritual sanctuaries that span from west to east of Bhutan, viz., Tharpaling, Shingkhar Dechenling and Tang Ugyen Choling in Bumthang, Ngenlung Drechakling, Khothak Rinchenling and Shar Kunzangling in Wangduephodrang, Samtenling in Paro, and Kunzangling in Kurtoe.

Longchen Rabjam passed away at the age of fifty-six in 1363 at the sacred site of Samye Chimphu in the morning of the 18th day of the Twelfth lunar month.

Soon after he passed away in Tibet, he came back to Bhutan in the form of the Great Terton Pema Lingpa (see biography here). And it is Pema Lingpa’s subsequent reincarnations and their blessings that Bhutan has been able to navigate through the rough waters of time peacefully and happily. The Wangchuck dynasty of Bhutan is closely connected to Pema Lingpa and his predecessor Longchen Rabjam. The most auspicious confluence of our time is that our current King and Queen hail from the Pema Lingpa roots.

A non-sectarian (Ri-mey) master and practitioner

The Treasury of Lives biography of Longchenpa concludes that:

“Outside of Longchenpa’s efforts to establish eight religious centers in Bhutan, he appears to have had no intention of codifying that which became known as “the Nyingma tradition,” and he is described by contemporary Tibetan historians as having resisted bureaucratic organization.  He was quintessentially ecumenical in his approach to educating himself. His title Samye Lungmangpa (bsam yas lung mang pa), which translates as “the One from Samye Who Has Received Many Scriptures,” was given to him because he was known to make academic tours of different learning institutions, and he received teachings from both the old and new tantric lineages. Nevertheless, in his writings he was primarily concerned with Dzogchen and the literature which has remained central to the Nyingma tradition.

Visions of Longchenpa to Jigme Lingpa and others

Longchenpa has appeared to Tibetan masters in visions and so is occasionally considered to have been a teacher to people who lived well after he passed away. Perhaps most famously these included Jigme Lingpa (‘jigs med gling pa, 1730-1798), whose visions of Longchenpa inspired him to later reveal one of the most widely-known of the later Nyingtik treasure cycles, the Heart Essence of the Great Expanse, or Longchen Nyingtik (klong chen snying thig) (note that the “longchen” in the title is not a reference to Longchenpa, as is often believed).” 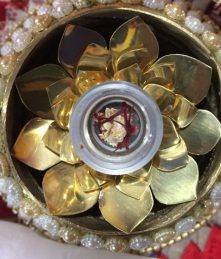